As I mentioned in the previous post, I had a few things to do this week: our university team was playing AltayCTF (we won the first place) and I had to move out of the dormitory. To compensate these days off, I’m working this weekend.

As planned, I’ve implemented clipping in all the other drawsteps and used these in all widgets. Now we can put any widget in the container and it would be clipped as it should be. More screenshots could be found on the special page.

Then I got all container-related commits in a new branch (because my separate container branch was based on cloud branch, as I had to test my container on Cloud tab) and issued a pull request.

I guess I’d spend some time polishing that when I’d get some feedback, but until then I’ve decided to test my cloud feature on Unix. All this time I worked on Windows and was using MinGW to check it could be built in Unix-like environment, but never launched that on actual Unix. I installed Kubuntu in VirtualBox and cloned my repo.

The first thing I found out is that our configure stops if there is no curl_config. I guess that’s not OK, because if there is no curl_config, we probably should build ScummVM without curl support (i.e. without clouds). Yet it works fine without SDL_Net installed, so my first built ScummVM was supporting clouds, but not local webserver — that’s how I checked that storage connection wizard works fine. 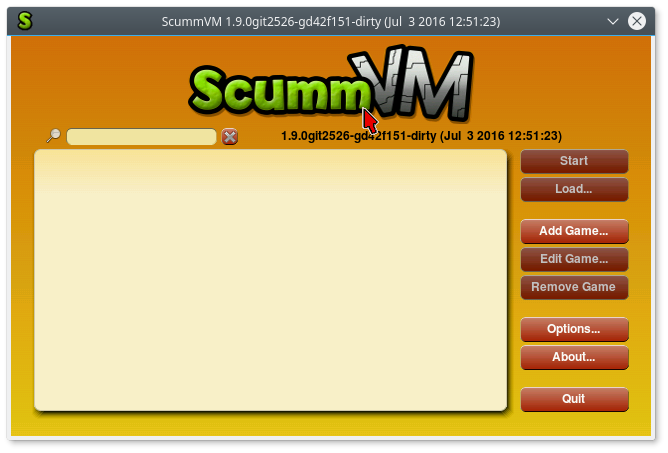 Then I installed SDL_Net and rebuilt ScummVM to check that the local webserver works fine too. It is. The saves sync wasn’t, though. I had to fix a few minor bugs, but that was easy. Now saves sync is OK too. I was lazy to edit .gitconfig or to setup a shared folder, so I just used ScummVM’s sync to upload necessary source files into my Dropbox :D

When I’d be done with the container, I’d start working on cloud files management — some GUI dialogs which allow users to upload and download game data.